The British Association for Immediate Care traces its roots back to the mid 1960’s when a Yorkshire GP formed the Road Accident Care Scheme to provide medical care for accident victims on the A1 corridor around Catterick. Since coming to GP practice in Catterick in 1950 after having served as an RAF doctor in the area after the war Dr Kenneth Easton (1924 – 2001) had attended over 2000 accidents.

In the early days working alongside Dr Easton and his colleagues was Mr Ron Exelby who had taken over his father’s haulage business on being discharged from the RAF in 1949. Realising the high accident rate on the Al made Catterick the ideal location for a vehicle rescue and recovery company he soon decided to specialise in that field. Ron quickly became an integral part of the rescue team, and would arrive at the accident scene with his crane and a crude range of tools, including hacksaws, chains and jacks to help with the extrication of trapped casualties. 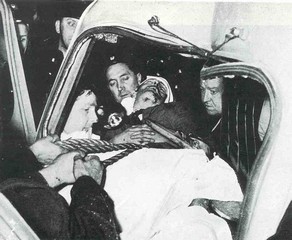 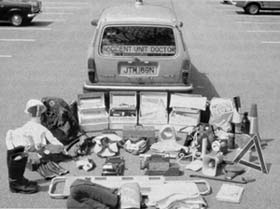 An inspiration across the UK

In 1967 Dr Easton formed a network of 34 medical colleagues covering a 1000 square miles and reliant on public support. This initiative stimulated the emergency services in turn to appraise their roles at road accidents and saw a new stimulus for training to work co-operatively. Following Dr Easton’s efforts and frequently as a result of personal contact doctors elsewhere began to set up similar schemes. Among them was Dr Kenneth Mourin in Coventry, Somerset based GPs Dr David Rawlins and Dr Donald Thomson (assited by Mr James Kennard whose wife had been involved in a road accident) and Dr Neville Silverston MBE in East Anglia to mention only a few.  Accident and Emergency Consultant Roger Snook started a hospital-based flying squad in Bath in 1967 responding to incidents in his own car using his invention – the “mediflash”, a green and red beacon attached to the roof with magnets, the foreunner of the magnetic flashing beacon, the mainstay of the Association’s doctors for many years as well as the forerunner of green flashing beacon introduced in the ’80’s for registered medical practitioners.

The British Association for Immediate care Schemes (BASICS) formed in 1977

In 1977 the British Association of Immediate Care Schemes, and referred to as BASICS,  was born with the support of the Royal College of General Practitioners, Ken Easton being the first chairman. As a result of his enthusiastic championing of immediate care through the 1960’s into the 1970’s immediate care had gained a respectability that invigorated young doctors who went on to develop their own careers, some of them as international figures, whilst retaining an interest in immediate care, a generation who largely remain with us today and who in turn have stimulated a later generation who are the stalwarts of today’s immediate care schemes around the UK. Whilst capturing the interests of his counterparts Dr Easton and his colleagues were not so successful in gaining government support.

Much respected internationally Ken Easton was the recipient of a Nuffield Fellowship in the early 1970’s and travelled and lectured extensively within Asia and Australia.

Since those early days the Association has grown to include an Education service providing internationally respected training in immediate care both in the civilian and military settings that now encompasses different health care professions and has been taught as far afield as Goa in India to Cyprus, from Malta to the eastern Bloc with students travelling from across the globe to develop their pre-hospital skills.

The Association has changed since its inception, its name was changed to the British Association for Immediate Care whilst retaining its acronym BASICS, reflecting its broader multi-disciplinary membership base of whom only the core are Scheme members the others practicing pre-hospital care in many different voluntary and employed settings. More recently the Association has changed its logo to the one used today and moved away from using the acronym preferring to use its full title.

Today the Association is a recognised authority on pre-hospital immediate care with its senior members advising within a number of governmental and non-governmental projects ranging from pandemic flu to civil resilience. The Resuscitation Council (UK) started life as a sub-committee of the Association (the Community Resuscitation Advisory Committee) and today the strong links remain as they do with the Faculty of Pre-hospital Care at the Royal College of Surgeons of Edinburgh.

The British Association for Immediate Care is a strong and vibrant professional association that brings together a wide range of individuals and maintains the driving force behind many of today’s leading developments in pre-hospital care.